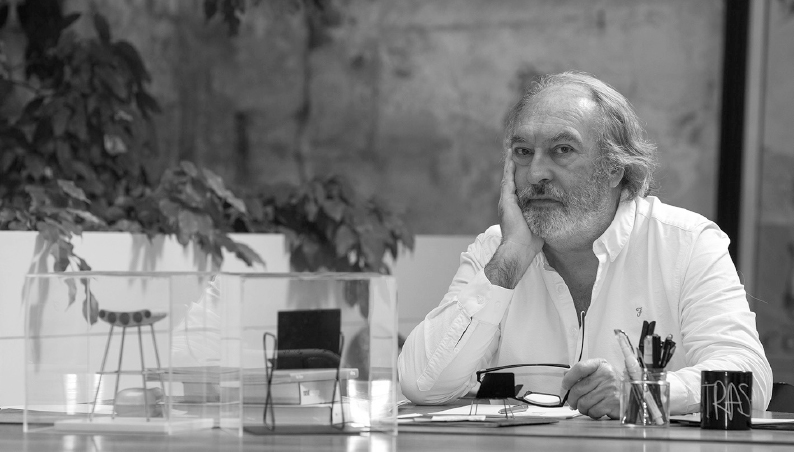 Fernando Salas (Seville, 1950), moves from his city of birth to Barcelona, where he begins his career as apprentice in 1964 at the studio MBM (Martorell, Bohigas and Mackay). His five-year stay determines his future as a versatile designer.

At the age of 24 (1975), the pioneering and prestigious Design magazine (England) makes a special mention of his lamp "Abanico" (translated, hand fan), exhibited together with the Olivetti typewriter designed by Mario Bellini.

In 1989 he settles his business in Palo Alto, an originally industrial premise in the Poble Nou district, in Barcelona, where Pierre Roca, together with Fernando Salas and Javier Mariscal, amongst others, promote the reconversion of its original warehouses and factories into studios and workshops occupied by creative professionals.

He decides to center his career mainly on interior design, in where he stands out through his spaces of powerful simplicity.

His Freddy Stool for Amat-3 represents his comeback to product design. His latest productions have been the Clip chair and Paquito armchair for Uno Design, the VIK series for ZIRU, and the GoodNews lamp, for Cronek.

Among other graphic works, he has designed the poster for bullfighter José Tomás' comeback in Barcelona and Mexico.

Some examples of housing projects complete his work as interior designer, such as the renovation of a family house in Olot, a new house in Montseny, or a loft in Barcelona or a restoration of a "masia" (catalan farmhouse) in Torelló.

He has given lessons in the design schools of Eina and Elisava, in Barcelona, and the Faculty of Fine Arts in Salamanca. He is also invited at the Faculté D'Aménagement de Montreal (Canada) and the Bolivarian University of Medellín (Colombia). In 1993 he teaches the specialized course of Interior Architecture and Furniture at the Barcelona School of Architecture (ETSAB).

He has also given speechs in several occasions for a wide range of Spanish schools.

His recent works include projects such as the Dos Torres restaurant in Barcelona, the interior design of the recently reopened theatre of El Molino, the showroom for Espai Carré, the renovation of Vega Sicilia's wine cellars, the restoration of a housing building in Raval district (Barcelona), two shoe shops for Cartujano (Berlin and Madrid), Futbolmania stores, or the last two shoe shops for Tascón in Barcelona.

Salas Studio uses COOKIES to improve your browsing experience and show you customized content according to your interests. If you want to disable cookies on your device, please see the information link below. Please note that some parts of our website will not function correctly if you disable cookies. If you accept this message, you accept the use of cookies on this device, according to our cookies policy, unless you have disabled them. More information